The Seychelles Police Force was established in 1775. 15 soldiers from Mauritius were brought in to do security duties. In 1802 a local police force was formed under the command of one Mr. Savy a Seychellois. In 1814 Seychelles ceded to be a Britain colony and for the 100 years that follow there was no big or no provision made for maintenance of law and order. That was perhaps because there was no crime in that period and the main target of the para military unit was to provide external security and internal security at a low level.

From 1840 to 1875 the record cannot be found simply because in 1862 there was a violent landslide which devastated the town area and the police station was also on its way and all record were lost. From that time to 1879 only few police station were built including one in Victoria. The strength by then were 45 men.

The present police HQ was built in 1950. There were 6 motorcycles, 2 land rovers and 1 fire engine land rover. In 1960 police began to re organize. There was a new police chief, new patrolling systems, strength were increased, more police stations were build including on Praslin and La Digue. In 1967. Police became more modernize, patrol cars were introduced, radio communication linking all stations. Seychellois officer seconded for specialized training with Metropolitan police and new Scotland yard in London, introduction & use of fingerprints, photography and crime scene investigations Bureau formed. Special force with about 45 men was also formed to prevent civil disorders, to assist general duties when required. In 1968, 6 women were recruited as police officer. Before that they were only Special Constable.

In 1974, new training school on Praslin island opened with the capacity to take 40 students on full board basis. This lead to better courses in law and procedures, supervisory courses for Sergeant and Inspector were introduced, increase in the number of senior officers going on overseas training. The force continued to progress with British influence. Seychellois were more politically active and the need to modernize and re organize the police.

Function of the Police
Article 161 of the Constitution and section 6 of the police force Act stipulates the General Functions of the Police Force
• Maintain law & order
• Prevent & detect crime in Seychelles
• Maintenance of public peace
• Apprehension of offenders
• To perform such other functions as may be prescribed by an act.

Commissioner of Police is appointed by the President, subject to approval by the National Assembly. He has the command, superintendence, direction and control of the police force. 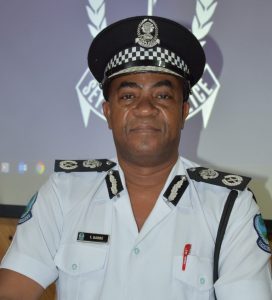 Mission
Prevent anything that may threaten the safety or security of any community; Investigate any crimes that threaten the safety and security of any community; Ensure criminals are brought to justice; and Participate in endeavours to address the root cause of crime.
Vision
Create a safe and secure environment for all people
Requirements to Join
Displays good character in Society
Aged between 18 to 30 years for first appointment
Medically and Physically Fit
Of reasonable height
Good academic qualification and passing of an Entrance Exam. Police officers have the ability to progress through ranks of Trainee Constable, Constable, Corporal, Sergeant, Sub Inspector, Inspector, Assistant Superintendent of Police, Superintendent, Chief Superintendent, Deputy Commissioner of Police to Commissioner of Police.